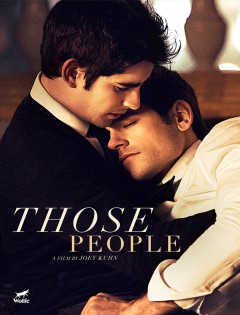 On Manhattan’s gilded Upper East Side, a young painter, CHARLIE (Jonathan Gordon), finds the man of his dreams in an older pianist from across the globe, TIM (Haaz Sleiman). If only Charlie weren’t secretly in love with his own manipulative best friend, SEBASTIAN (Jason Ralph), who is embroiled in a financial scandal. In the wake of Sebastian’s notoriety, their tight-knit group of friends must confront the new realities of adulthood.

“Those People is a gay “Gatsby” with heart” – LOGO’s NEWNOWNEXT

“Those People serves up just enough scandal, intrigue and OMFG moments to keep us clutching our pearls. But it’s in its treatment of characters, not caricatures, that gives the film a lasting impact beyond all that glitters.” – HUFFINGTON POST

“If you’re interested in New York City, gay sex, and Gilbert & Sullivan, you’re going to love this…Those People is like the HBO show Looking, except interesting.” – THE STRANGER (Seattle)

“Stylish and sexy and wrought with real conflicts, “[Those] People” is a winner.” – SAN FRANCISCO EXAMINER

“A decadent, dazzling debut for Joey Kuhn… As it turns out, there may be a beautiful coming-of-age story at the center of Those People, but an even more invigorating one behind the scenes in witnessing a filmmaker with as distinctive a voice as Kuhn come right out the gate with something so accomplished.” – THE MOVEABLE FEST

“A refreshing triumph…’Those People’ positions itself in the vanguard of the new LGBT film wave as an instant classic about loyalty, forgiveness, self-nurturing, and accepting love even when you don’t feel you deserve it.” – SEATTLE GAY SCENE