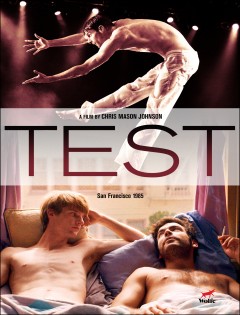 Set in the free-spirited San Francisco of 1985, Chris Mason Johnson’s Test lovingly portrays this exciting and harrowing era as young Frankie (dancer Scott Marlowe in a breakout acting debut) confronts the challenges of being an understudy in a modern dance company where he’s taunted to “dance like a man!” Frankie embarks on a budding relationship with hunky Todd (Matthew Risch, HBO’s “Looking”), a veteran dancer in the same company and the bad boy to Frankie’s naiveté.

* NEW YORK TIMES CRITICS PICK!
“Extraordinary… As Frankie, Mr. Marlowe delivers a quiet, moving performance of such subtlety and truthfulness that you almost feel that you are living his life.” — The New York Times

“It’s a thrill to see an indie this fresh again that speaks so personally to the LGBT audience.” — Towleroad

“There’s a performance scene at its midway point — Frankie’s first opportunity to perform with the company — that stands out as one of the best from any film this year.” — NPR

“Touching, funny, and beautiful.” — Next Magazine

“Writer-director Chris Mason Johnson has created a visually compelling film about an important subject that until now had pretty much defied cinematic expression.” — San Francisco Chronicle

“One of the strongest entries in this year’s festival…’Test’ has already been compared to Bill Sherwood’s 1986 film, ‘Parting Glances,’…widely regarded as a landmark of gay cinema.” – Stephen Holden, THE NEW YORK TIMES

“If there was ever a contemporary film that illuminates why queer cinema still matters, this is it.” – Matthew Connolly, FILM COMMENT

“A breathtaking little film…beautiful and captivating.” THE ADVOCATE

“The lithe Marlowe and his staggering cheekbones give a nuanced performance.” INDIEWIRE

“Hits many grace notes…An appealing variation on a popular genre…A vibrant period piece with a genuinely likable love story at the center of the action.” -Stephen Farber, THE HOLLYWOOD REPORTER