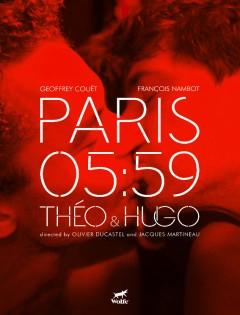 It’s after midnight in a Paris gay sex club when Théo and Hugo lock eyes across the crowded room – and their connection is electric. They make their way together and have passionate sex. Afterwards, they leave the club and explore the streets of Paris, drunk with the possibilities of love at first sight, as well as sobered by the risks of their passion. *NR: This movie contains graphic sex and nudity.

“Their odyssey, told in real time … shares the gentle walking-and-talking air of Richard Linklater’s Before Sunrise. Unlike that film’s characters, however, Théo and Hugo havethoroughly explored each other’s bodies before opening up their minds.” – The New York Times

“Paris 05:59 best captures how different the world looks when you emerge before sunrise, the giddiness of making a truly personal connection in an intentionally impersonal environment, and the beauty that can be found in the darker corners of human behavior if you aren’t presuming you’ll find light.” –  San Francisco Weekly

“Paris 05:59 Theo & Hugo: This nuanced character study begins with graphic sex at a gay club — one of the most electric sex scenes in LGBTQ cinematic history — before beautifully pivoting into a compelling story about two Frenchmen who have fallen in love at first sight. The budding relationship (presented in real time over 90 minutes) veers effortlessly from turbulence to tenderness.” – San Francisco Chronicle

WINNER
Jury Award for Best Director
Atlanta Out on Film