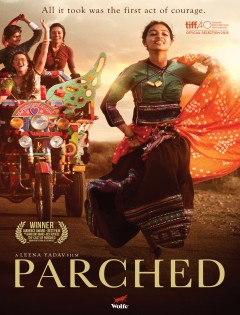 PARCHED is an inspirational drama about women set in the heart of parched rural landscape of Gujarat, India. It traces the bittersweet tale of four ordinary women: traditional Rani, a young widow; lively Lajjo, who lives in an abusive marriage; outcast Bijli, a dancer and prostitute who becomes friends with Rani and Lajjo; and Janaki, a young teenager in a miserable arranged marriage to Rani’s son Gulab.

We see the friends unapologetically talk about men, sex and life as they struggle with their individual boundaries and their inner demons. Gradually, they begin question the century-old traditions that have kept them locked in servitude. One fateful night, the women come together and take a bold step that will change the trajectory of their lives.

*Please note: This title is not specifically lesbian, but an amazing story of women finding empowerment through their bonds with each other. We know you will enjoy it.

“A burning source of inspiration to oppressed women everywhere. . . filmmaking heroism at its most effective.” – AwardsCircuit.com

“One of the most honest, uncompromising portrayals of female friendship I’ve ever seen on screen.” – Fariha Roisin, BROADLY