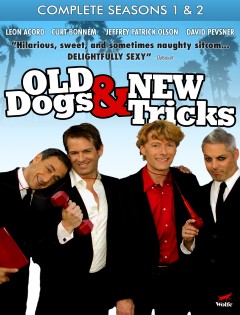 Los Angeles (in general) and West Hollywood (in particular) add a strong flavor to Old Dogs & New Tricks, with its traffic, earthquakes, plastic surgery, and strongly youth-obsessed culture. But the focus remains on how these four different gay men react (or overreact) and adjust (or not) to getting older:

* Nathan Adler (Leon Acord):  A successful talent agent, Nathan is approaching his 50th birthday when the advances of an amorous 25-year-old underwear model knock him for a loop.

* Brad King (Curt Bonnem):  A one-hit wonder from the late 1980s, Brad has turned the on-line hook-up into an art form.

* Ross Stein (David Pevsner):  A former TV leading man in the 1990s, Ross is now settled into a long-term gay marriage — but as his husband becomes more successful, Ross finds himself spending too much time alone.

“Sharp and funny.” – The Backlot

“One of Ten Web Series You Should be Watching” – L.A. Frontiers

“From the start Leon (Acord) has been doing something new with OLD DOGS & NEW TRICKS  . . . He has written gay characters the like of which are rarely seen.” – The Real Steve Gray