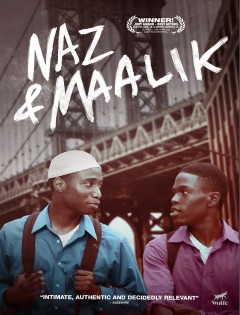 In this riveting dramatic tale, gay teens Naz and Maalik are friends, classmates, business partners and lovers. As the two closeted Muslim teens go about their regular daily routine on a Friday afternoon in Brooklyn they arouse the suspicions of an undercover FBI agent who begins to track them. This complex tale of race, religion and sexuality features a pair of tremendous performances from Kerwin Johnson Jr. as Naz and Curtiss Cook Jr. as Maalik. Intimate and meditative, Naz & Maalik examines the mysterious forces that animate teenage minds.

An exceptionally well-crafted drama, and an auspicious feature debut from writer-director Jay Dockendorf.

“A day-in-the-life look at the unique experience of being young, gay, black, and Muslim in Brooklyn… writer-director Jay Dockendorf’s film is intimate, authentic, and feels decidedly relevant in today’s current context… Naz & Maalik is an impressive debut.” – Indiewire

“A powerful treatise on what it is to be young and disenfranchised in New York City.” — Austin Chronicle

“Unfolds with a youthful vitality, bolstered by the charm of its lead actors.” — The Hollywood Reporter