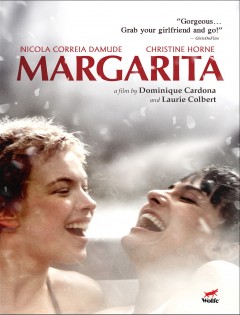 “Gorgeous. Take any opportunity you can to see this film.” — Girls On Film

“A queer Mary Poppins for the new generation.” — SheWired.com

This wonderful lesbian drama tells the tale of an undocumented Mexican nanny, Margarita (Nicola Correia Damude, Havanna 57) whose girlfriend Jane (Christine Horne, Tru Love) is reluctant to commit and whose yuppie employers — a nice Toronto family, including a bi-curious Mom — are about to let her go.

“Nicola Correia Damude is such a commanding presence that I hope to see much more of her in future projects. It’s always refreshing to see a confident lesbian character, whose story has nothing to do with coming out or self-doubt.” — AfterEllen.com

“Gorgeous… Take any opportunity you can to see this film. Grab your girlfriend (or the one you want to be your girlfriend) and go, she’ll be putty in your hands.” — GirlsOnFilm

“A buoyant comedic drama about love, loyalty and the families we create.” — GoldStar.com

“Damude imbues Margarita with a sensitivity that is deeply endearing and the profound signature strength that comes from women of character and perseverance. . . perfectly balanced dramedy.” – L.A. Splash

“An unconventional family drama . . .  a sweet and emotionally accessible story” – Criticize This

“Nicola Correia Damude is wonderful as the loving yet stubborn Margarita, a savvy young woman who hides her fears but wears her emotions on her sleeve.” – Scene Creek

“The performances, especially by Damude and girlfriend Christine Horne are very good, and there’s lots of gratuitous lesbian sex in the hot tub.” – NowToronto.com

“A potent cocktail of heart, humour, and humanity.” – Sound on Sight

“A beautiful and uplifting film that ends up filling the viewer up with hope . . . Margarita wows through its simplicity and its charm and should leave anyone with a heart smiling at the end.” – Next Projection

“What a charmer Margarita is! . . . Plays like an indie relative of Mary Poppins with a LGBT twist or like Canada’s answer to The Kids Are All Right . . .” –  Cinemablographer