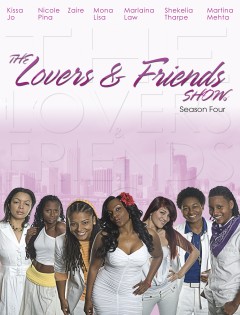 The saga continues with Season 4 of this popular low-budget lesbian series as six lesbians of color navigate their way through life’s challenges with attitude and a fabulous sense of style!

Since its debut in 2008, The Lovers & Friends Show, with its honest and often humorous depiction of urban lesbian life, has opened the eyes of people within and outside of the LGBT community.

Charming, funny, bright, seductive and mischievous are just a few of the words describing the characters: Lisa (Kendall Starr), a med student new to the world of lesbianism; Kai (Marlaina Law), the best friend with the heart of gold who is dealing with her psycho ex-girlfriend; Tori (Nicole Pina), the entertainment columnist who falls in love with her boss; Yasmin (BeBe Brunswick), an outspoken political firecracker; Mercedes (Christy Rodriguez), the social climbing magazine editor and Dre (Shakelia Tharpe), the bad boy sweet talker who keeps a flock of women.