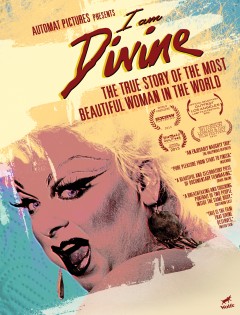 Packed with great interviews and clips, this dynamic, fun and often poignant portrait of the legendary Divine brings to life a complex understanding of John Waters’s favored muse.

I Am Divine is the story of Divine, aka Harris Glenn Milstead, from his humble beginnings as an overweight, teased Baltimore youth to internationally recognized drag superstar through his collaboration with filmmaker John Waters. Spitting in the face of the status quos of body image, gender identity, sexuality, and preconceived notions of beauty, Divine was the ultimate outsider turned underground royalty. With a completely committed in-your-face style, he blurred the line between performer and personality, and revolutionized pop culture. I Am Divine is a definitive biographical portrait that charts the legendary icon’s emotional complexities and rise to infamy.

“Divine gets her own well-deserved spotlight.” — Peter Debruge, Variety

“Captures the exuberant spirit of a time in which difference brought together like minds and changed attitudes.” — Mark James, Film School Rejects

“Just as garish, splashy, and loud as Divine himself.” — Drew Taylor, indieWire’s The Playlist

“A breathtaking and touching portrait of two people inside the same body.” — Joshua Brunstig, CriterionCast