Getting Go: The Go Doc Project 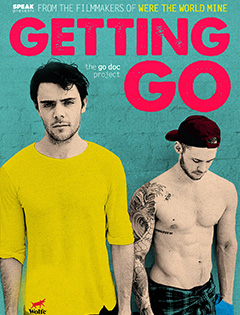 “An affecting drama full of heart and humor, reminiscent of instant classics like Weekend.” — Edge Boston

From the team that created Were The World Mine, this wonderfully innovative, poignant and exceptionally sexy drama has an infectious energy and a completely unique aesthetic as it tells a classic story of lust becoming love — and then some. Super cute Tanner Cohen (Were The World Mine) returns to the big screen as a college boy named Doc who drunkenly cruises a gay go-go boy named Go (super hot Matthew Camp) with the pretense of making a documentary about him.

“A sweet, sexy movie about two very different young men in New York falling in love and finding themselves through their connection to one another.” — Edge Boston

“A little gem of LGBT cinema that brings two engaging and likeable characters to the fore.” — So So Gay

“Possibly one of the best films ever to be featured in the queer film festival circuit… And its mind-blowing sex scene is worth watching the film if only for that.” — PopInGay

“One of the most bewitching and potent films of the year.” – New York Cool

“An appealing look at what happens when intimacy replaces curiosity, and when reality replaces fiction.” – Huffington Post