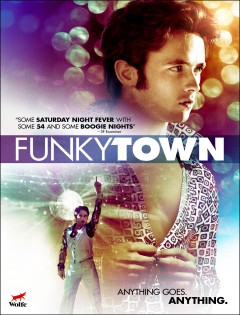 “A great film. From start to finish this movie was amazing.” – The Film Reel

Featuring a spectacular soundtrack of the greatest hits of the era, Funkytown is a glossy, big-budget and loving recreation of the glitz, sex and debauchery that was Disco. This wonderfully authentic drama (drawn from true stories of the time) features such hot classic disco hits as: Disco Inferno, Don’t Leave Me This Way, Knock on Wood, Doctor’s Orders, Hot Stuff, I Feel Love, and of course Funkytown.

“Some Saturday Night Fever with some 54 and some Boogie Nights.” — SF Examiner.com

“Faithfully captures the era, thanks to production designer Jean Bécotte… and a soundtrack that will have you shaking your groove thing as you emerge from the theatre.” — The Globe and Mail

“Steve [Galluccio]’s script expertly wove main and sub-plots of fame, greed, drugs and yes – an Italian boy in denial about his homosexuality – that started, climaxed and resolved to leave me perfectly satisfied.” -John Woolfrey, Queer Montreal

“Politics, sex (and orientation) and music all come together at Montreal’s Starlight disco in this winning ‘time capsule’ view of a tumultuous (and transitional) period.” — DVD Release Report