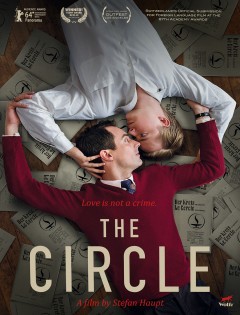 A gorgeous dramatization of gay lovers Ernst and Robi who meet in Zurich in 1958 against the backdrop of “The Circle” (the pioneering gay organization and internationally renowned underground club), this award-winning drama also showcases the true story of Ernst and Robi, featuring interviews with the men (now in their 80s) along with stunning archival images and fascinating research into this incredible era in gay history. Starring Matthias Hungerbuhler and Sven Schelker as Ernst and Robi.

For Collectors! We are also offering a limited number of signed theatrical posters for sale – Click here for information!

OUTFEST GRAND JURY STATEMENT:
“The Jury’s selection is a film that redefines the form of documentary filmmaking. With seamless integration of fiction and nonfiction, it elevates the craft of storytelling to new emotional heights. For its innovative techniques in overcoming the unique challenges of telling the little known history of a courageous pre-WWII underground gay movement, the 2014 Outfest Grand Jury Award for Outstanding Documentary Feature Film goes to THE CIRCLE (DER KREIS) directed by Stefan Haupt.”

“A chapter in history well worth bringing to light.” – Nicolas Rapold, The New York Times

“The Circle attains richness and authenticity that mainstream movies like The Imitation Game and Brokeback Mountain rarely do.” – Out.com

“This is a fascinating and often tumultuous story…” – Abby Garnett, The Village Voice

“The Circle has a sincerity and an honesty that shames far more expensive but over-polished dramas . . .  shows you both the happy ending and the incredibly hard work it took to get there.” – James Rocchi, TheWrap

“Affecting and informative, it’s one of the best foreign language films of the year.” – Shane Slater, Awardscircuit.com

“The drama’s urgency gives The Circle the feel of a bombshell.” – David D’Arcy, Screen International

“The romance between Ernst and Röbi acts as a microcosmic example of a larger debate whose broad terms remain familiar.” – Vadim Rizov, AV Club

“Stefan Haupt’s conscientious and engaging film makes clear right off the bat that, no, there was no place in Europe that was a gay utopia in this period and that even the most progressive-minded of societies had their growing pains.” – Glenn Kenny, RogerEbert.com

“The film refuses to tease us with suspense, overwhelm us with sentimentality, or defy us with nuance.” – Diego Costa, Slant Magazine