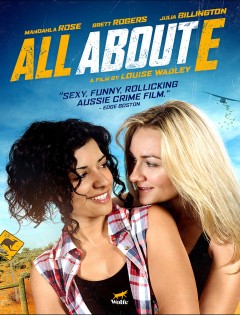 Listen to this Interview of Mandahla Rose on The Jolt w/ Larry Flick,
recorded  12/02/15

“All About E has that buildup we crave and delivers an incredibly tender and passionate love scene that will have you reaching for the rewind button.” — Curve Magazine

A beautiful sexy DJ is forced to run when she stumbles on a bag of cash. Can she keep the money, conquer her demons, AND get the girl?

Young Arabic Australian Elmira, or E as she insists on being called, seems to have it all. She’s one hot sexy DJ at Sydney’s top gay nightclub and has her pick of the girls. But E doesn’t have a clue. She’s not out to her traditional Lebanese family, she’s abandoned her beloved music and she’s lost Trish, the one relationship that really matters to her. When she stumbles on a stash of cash, she and her best friend and husband of convenience, Matt, are forced to run. But E finds she has burnt too many bridges, and there is nowhere to run but outback Australia and the arms of the ex-girlfriend who broke her heart. Can she keep the money, conquer her demons, AND get the girl?

“Featuring laughs, suspense, a deliriously good sex scene, and a rousing finale, “All About E” has something for everyone.” – San Francisco Chronicle