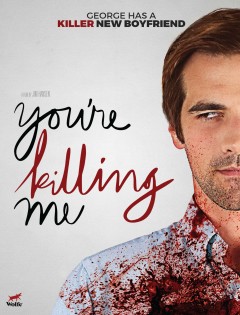 When George (Jeffery Self) catches the attention of Joe (Matthew McKelligon) they immediately begin dating. While all of George’s friends agree that Joe seems a bit strange, George claims his new beau “isn’t scary, he’s gorgeous.” But as George’s friends start to disappear, the remaining group decides to take matters into their own hands.

Directed and co-written by Jim Hansen (creator of The Chloe Videos with Drew Droege), this gay “mumblegore” mixture of “Dexter” and “Gilmore Girls” blends witty banter, pop culture references and good old- fashioned murder. You’re Killing Me will have you laughing hysterically as you cover your eyes in fear. Co-starring Drew Droege, Matthew WIlkas and Jack Plotnick.

“One of the funniest films at OutFest this year.” – BuzzFeed

“It’s infectious and just bloody uproarious!”… “Has some penetrating things to say about how people rarely see anything outside their own land of self. Sometimes it takes a machete to the head to wake a person up to their own flaws and shortcomings.”- Edge Media