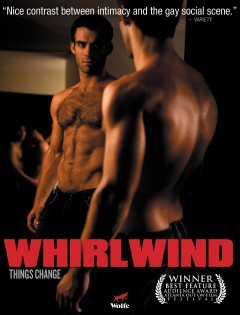 A smart and sexy story about the complexity of gay relationships — this touching, funny ensemble film explores non-monogamy, commitment, friendship, getting older and more.

Handsome David Rudd stars as Drake, a sexy and charismatic stranger who infiltrates a group of good-looking, successful, thirty-something gay men in New York City. The flirtatious Drake spices up the lives of this tight knit circle of friends, but soon creates unexpected drama. Drake has a bitter past filled with hurt and betrayal. He thinks that all gay men are cheaters and resents anyone who seems happy and committed. He proceeds to manipulate, seduce and tear apart these friends to prove that no one deserves happiness. Will these friends survive Drake’s cunning schemes or prove that love and friendship can prevail against all odds?

“The banter is witty and the sex is hot, securing Whirlwind a sure spot in gay boys’ hearts.” – Southern Voice

“Whirlwind is a very well crafted and enjoyable film with convincing characters facing real issues and challenges… The acting is uniformly excellent… There is also ample sex and eye candy for the voyeur in all of us. Exceptional cinematography and cutting complete the package.” —Michael Klemm, CinemaQueer.com