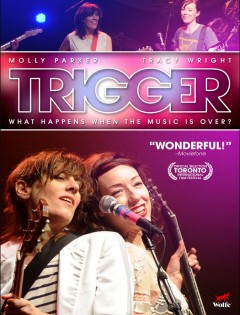 “The best example of female friendship I’ve ever seen on the big screen.” – Moviefone

Two women rockers (Molly Parker, Deadwood; Tracy Wright, Blindness), whose friendship fell apart along with their band, reunite ten years later for a benefit concert. After their long estrangement, they come together for dinner, the concert, and the after-party, with the hope of recapturing their once-magical connection.

“Trigger’s success comes overwhelmingly from the chemistry between Parker and Wright — the latter of whom deserves every ovation her performance is bound to receive.” – Eyeweekly.com

“The best example of female friendship I’ve ever seen on the big screen.” – Moviefone

“Bruce McDonald knows how to bottle the lightning of rock ‘n’ roll!” – MetroNews.CA

“Trigger develops enormous power from the solemnity of these performances . . . and the readily evident chemistry of the two leads.” – IndieWire

“Trigger earns its stars because of the way these characters talk to each other, what they discuss and the brilliant, heartbreakingly real way they’re written, acted and directed.” – Chart Attack

“It looks great, the edit is tight, there’s no doubt that it’s a rare breed of director that could take these circumstances and turn out a film of this caliber.” – Twitch Film

“Trigger is a showstopper with a poignant performance from the late Tracy Wright.” – CBC Arts

“It’s an absolute treat that we are privy to the sensation of performances by Molly Parker and Tracy Wright.” – MovieMoxie

“A particularly rewarding showcase for Wright . . . it’s a true rebel spirit that electrifies her conversations with Parker, who is as fun and flirty as she’s ever been here.” – IFC News