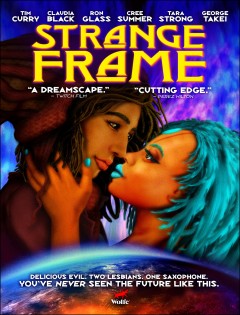 “The trippiest lesbian movie ever made.” — AfterEllen.com

This gorgeous animated sci-fi story is centered around the theme of the transformative power of love between two women. As our story begins it is the 28th century, 200 years after the Great Earth Exodus. We’re on Ganymede, one of Jupiter’s moons. Our hero Naia (prolific voice actress Tara Strong) is a feisty, young singer-songwriter who falls in love with the beautiful saxophonist Parker (Claudia Black — Farscape, Stargate SG-1). The two embark on their new relationship and also form a new band — and now they have to not only make it as musicians but also to fight for their freedom.

Here on Ganymede the human race has long since left a decimated Earth. To survive the harsh climates of other planets and moons, humans have genetically modified themselves making skin color and sexual organs a common matter of fashion. Dramatically rendered in rich, colorful animation, Strange Frame brings us into a world of space pirates, indentured slaves and genetic mutations — infused with music throughout, to create a dreamlike tale unlike anything you’ve ever seen.

“Strange Frame is wonderful. It’s uncompromising in its look and the design is brilliant. It feels futuristic for real.” – Ralph Bakshi, American animator (The Lord of the Rings, Cool World)

“It’s thrilling, sexy, entertaining due to it’s massive amount of music and visual stimulation, but more importantly, a story that has a deep meaning and a refreshing plotline. This film has cult classic written all over it.” – Shakefire

“Not since WIZARDS have I enjoyed a rock musical with animationthis much. Speaking of animation the characters are exquisite…The smooth flow of this cutting edge film is more than sci-fi animation – it is an experience not to be missed.” – Jeri Jacquin, Movie Maven

“The most original queer film that’s touched my DVD player in years… [An] ode to the power of love and music and freedom.” — Danielle Riendeau, AfterEllen.com

“The style of animation is unlike any other. The movie enlists Hollywood’s A-list voice, music and mixing talents.” —Peter Sur, Hawai’i Times-Herald