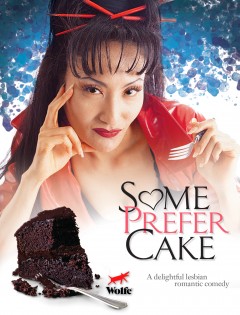 This fast-paced San Francisco comedy follows best friends Kira (the lovely Kathleen Fontaine) and Sydney (Tara Howley) along intertwining paths of sex, food and relationships. Kira aspires to be a great comedian but her stage fright makes for some disastrous open mike comedy outings. To make matters worse, her sister’s (Mimi Gonzalez) comedy career is taking off, thanks mainly to the material that Kira writes for her. Kira attempts to overshadow her career inadequacies by sleeping with as many willing female partners as possible. But things start to backfire when one of her discarded conquests (Machiko Saito), refusing to be satisfied with a one-night stand, proceeds to stalk Kira as well as her roommate and best friend.

Kira’s straight pal Sydney lives vicariously through Kira’s predatory approach to sex while constantly badgering her to get her act together. In reality, Sydney shares Kira’s insecurities but with an added dash of food obsession. To the dismay of her friends, she places a higher priority on devouring chocolate cake than she does on enjoying a sexual jaunt with her boyfriend Greg. Working dutifully as an assistant editor for the San Francisco Bay Guardian, Sydney claims “no problems” with her career or her relationships. Yet, unable to finish a single review on time, she silently pines to be the Guardian’s restaurant critic.

One day, the two friends’ career anxieties and sexual frustration explode in a showdown at the laundromat. Their ensuing separation allows each character to refocus her life. Kira meets Robin (Desi del Valle) and for the first time is more interested in what’s going on upstairs rather than below the belt. She begins to let down her guard, and in so doing, finds the stage a friendlier, more comfortable place. Sydney, meanwhile, publishes her first restaurant review, finds intrigue in the advances of a psychotic stalker, and unleashes a new sexual fervor on a flirtatious but unsuspecting neighbor.