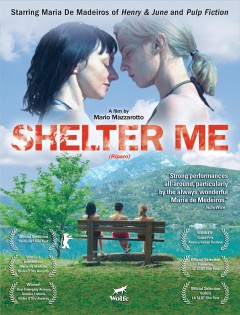 “I LOVED this film… One of the best lesbian-themed films I’ve seen.” — AfterEllen.com

Lesbian couple Anna and Mara return from a holiday abroad, and realize that Anis, a young Moroccan immigrant, managed to hide in their car in order to cross the border to Italy. At first unsure of what to do, they then decide to take him with them. Gradually Anis establishes himself in the life of the couple and for a brief moment, the three manage to help and support each other in an unusual and emotionally intricate relation. Yet this precarious balance is short-lived: Anis loses his job and is rejected by Mara whom he has fallen in love with and Anna has to witness her idyllic domestic arrangement fall to pieces.

SHELTER ME portrays three very unique characters confronted with an array of contemporary social issues. The richly portrayed relationship between Anna and Mara is the emotional centerpiece of this compassionate and moving drama.