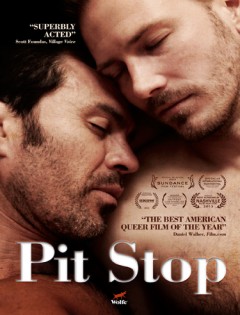 In this perfectly crafted American drama, openly gay Ernesto (Marcus DeAnda) and closeted Gabe (Bill Heck) grapple with the sad tribulations of being gay in a small, working-class Texas town. This Sundance smash is a truly uplifting love story about male intimacy, the heartache of unsuccessful relationships and the transformative power of love.

“I need to get on with my life,” Ernesto pronounces as he kicks out live-in ex-boyfriend Luis. Macho yet sensitive, Ernesto still carries a hopeless torch for his other ex-lover, Martin. Meanwhile, down-to-earth building contractor Gabe seeks solace with his ex-wife and six year-old daughter while pining over the loss of his relationship with Chuck. Trying to find connection amidst formidable loneliness — this is the story of Ernesto and Gabe.

Reminiscent of such classic rural gay love stories as Big Eden and Brokeback Mountain — and showcasing equally accomplished performances from its handsome leads — Pit Stop achieves an understated tone of authenticity rarely seen on screen as it shows us a tender, beautiful slice of gay American life.

“A beautiful, frequently sad, but ultimately uplifting story that bears inevitable comparisons to Brokeback Mountain for its strong, silent and aching depictions of two men who love men and are determined to find real love.” — Queerty.com [Movies You Shouldn’t Miss]

“Packs a punch” – THE MOVEABLE FEST