Packed in a Trunk: The Lost Art of Edith Lake Wilkinson 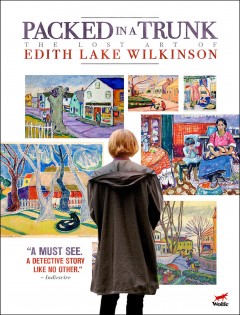 “It will give you goosebumps.” — AfterEllen.com

Like a fast-paced detective story, PACKED IN A TRUNK celebrates the life of Edith Lake Wilkinson, a gifted and prolific lesbian artist who, in 1924, was committed to an asylum. All of Edith’s worldly possessions were packed into trunks and she was never heard from again (objections had been raised at the time about Edith’s “close and constant contact” with her longtime companion Fannie).

Edith’s great-niece, Jane Anderson (Emmy Award-winning writer & director) grew up surrounded by Edith’s paintings after her mother discovered the trunks in their relative’s attic and rescued the work. This delightful film follows Jane and her spouse Tess in their efforts to find answers to the mystery of Edith’s buried life, return her art to Provincetown where she once lived and thrived, and have Edith’s contributions recognized by the art world.

NOMINATED FOR NEWS & DOCUMENTARY EMMY!
*Stay tuned for the results!

“A must see. A detective story like no other…”– Indie Wire

“It will give you goosebumps” — After Ellen

“The story develops into something remarkable, with coincidences and parallels aplenty…” — The Kansas City Star