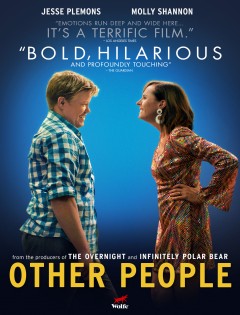 A struggling gay comedy writer in New York City (Jesse Plemons) – fresh off a breakup and in the midst of the worse year of his life – returns home to Sacramento to care for his dying mother (Molly Shannon) in this affecting family drama from “Saturday Night Live” writer Chris Kelly.

“Shannon plays this suburban woman, a teacher, with such simple, heartbreaking realism…” — People

“The movie belongs to Shannon … the SNL veteran digs into the role of a dying mother grappling with regret with subtle ferocity… Somehow, almost miraculously, Shannon makes her character become stronger as she gets weaker. It’s a wonderful performance.”– Entertainment Weekly

“Small moment by small moment, Other People turns Kelly’s own experiences caring for his mother into something touchingly universal.”– Screen International

“Emotions run deep and wide here; anyone who’s ever lost a parent, longed for love and acceptance, or tried to find his or her true self should easily relate. It’s a terrific film.”– Los Angeles Times