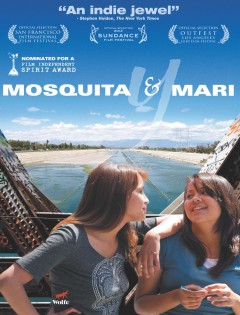 This exquisitely crafted coming of age tale follows a pair of Latina teens who fall gradually in love against the backdrop of Southeast Los Angeles.

When straight A student Yolanda — aka Mosquita (Fenessa Pineda) decides to help struggling tough girl Mari (Venecia Troncoso) with her homework an intense attraction evolves between the two. As their friendship grows, a yearning to explore their strange yet beautiful connection surfaces. Lost in their private world of unspoken affection, lingering gazes, and heart-felt confessions of uncertain futures, Yolanda’s grades begin to slip while Mari’s focus drifts away from her duties at a new job. Mounting pressures at home collide with their new-found desires thus driving Yolanda and Mari’s relationship to the edge, forcing them to choose between their obligations to others and staying true to each other.

“A robust work of self-discovery for two girls at the most awkward and confusing years of their young lives, and a testament to Aurora Guerrero’s storytelling prowess.” – Hollywood Reporter

THREE STARS! “Guerrero’s attitude toward the teenagers — understanding and affectionate . . . is  what holds your interest.” – New York Post

“Incredible . . . crafted to perfection . . .As real and honest a film as we’ve seen in recent years, with a script that invites you completely inside the movie’s world, and young stars who fill their roles with equal weight and youthful exuberance.” – After Ellen

“Shot with fly-on- the wall realism and boosted by natural performances, this is the sort of gem you might not hear much about, but you’ll be glad to have discovered.” – New York Daily News

“An honest, funny, charming, emotionally raw account of first love that anyone can relate to.” – The Script Lab