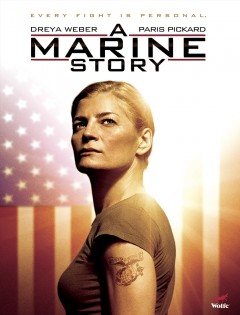 The remarkably hard-bodied actress, aerialist and P90X star Dreya Weber (The Gymnast) portrays Alex, a decorated Marine officer unexpectedly discharged from wartime duty. Returning to her conservative home town she agrees to coach troubled teen Saffron (Paris Pickard), who faces jail time – or much worse – if she doesn’t enlist. No-nonsense Alex is the authority figure Saffron needs, and inspires the young woman’s transition from slacker to boot camp-ready Marine recruit. But an ugly campaign to “reveal the truth” about Alex’s discharge threatens to derail both women’s futures.

This highly decorated film earned 20 awards on the film festival circuit — including the Outfest Grand Jury Prize for Best US Narrative Feature — and acclaim from critics and audiences worldwide!

“Weber anchors the movie with a gritty, honest performance that has the same to-the-bone quality as Melissa Leo’s in ‘Frozen River.’ There’s not a false note or inflection.” – Stephen Holden, New York Times

“This film does not go where you might think it will go because it’s so credibly written, acted and directed. Don’t ask, don’t tell? How about: Don’t miss this film.” – San Francisco Chronicle

“What is revelatory is the mature intelligence of Farr’s screenplay, and the fascinating, subtle beauty of Weber’s portrayal of a woman who’s been holding herself within for so long that she can barely breathe.”  – LA Weekly

“Weber is effective and convincing . . . phenomenal performances throughout.” – Cherry Grrl.com

“A well done, thought-provoking intimate portrait of a modern woman in the military.” – WeAreMovieGeeks.com

“Like a female Clint Eastwood, Weber’s Alex favours action over procrastination or heartfelt speeches. Self-pity and tears aren’t her stock in trade: “Marines don’t cry; their eyeballs sweat” is the mantra she lives by.” — Sound On Sight