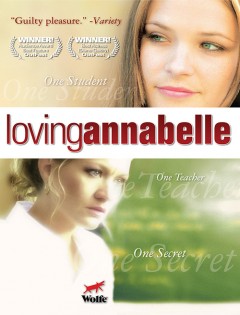 One Student, One Teacher, One Secret

Director Katherine Brooks rocketed to the top of favorite lesbian movie lists around the world with this wildly popular 2006 lesbian romantic drama. This award-winning film continues to earn new fans every day. Enjoy!

Simone Bradley is Saint Theresa’s prized young poetry teacher who finds peace and security within the boarding school walls. Surrounded by a lush atmosphere with little conflict, Simone has settled into a life of comfort and purpose educating her young female students. Annabelle is a charismatic and enchanting new student who quickly draws attention for her rebellious behavior. Fearing Annabelle will influence the other students, rigid Headmistress (Ilene Graff), instructs Simone to keep an eye on Annabelle and get her under control. Simone, however, quickly learns that the real challenge is not Annabelle’s behavior but the attraction budding between the two. As Annabelle pursues her teacher, she unleashes the passion that has been locked deep inside Simone, who must decide whether or not to enter an affair that could cost her everything.

Inspired by the 1931 German classic, Maedchen in Uniform, director Katharine Brooks’ Loving Annabelle gives a modern telling of this “forbidden love” story that continues to be controversial to this day. With stunning cinematography by Cynthia Pusheck, Loving Annabelle offers excellent performances from its female leads, Diane Gaidry and Erin Kelly, as well as a featured performance by Academy Award nominee/Golden Globe recipient Kevin McCarthy.

Loving Annabelle explores the complexity and controversy of love and struggle between two women who have every reason to deny their feelings. Blind to the world around them, the two journey into a love affair destined to change their lives forever.

This handsome collector’s edition DVD is jam-packed with extras including alternate endings and deleted scenes.

“An honest and fascinating look at a subject few would dare to explore with this depth.”-Metroactive (San Jose)

“You won’t be able to take your eyes off the screen.” -Lisa Steinberg, StarryMag.com