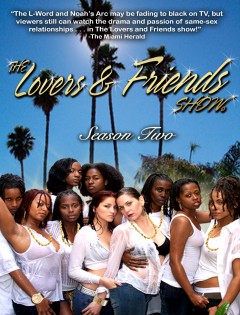 “One of the most inclusive, realistic and downright funniest shows!” – AfterEllen.com

The girls are back for Season 2 of the scrappy low-budget hit, The Lovers & Friends Show!

Join Lisa, Kai, Tori, Dre, Yasmin and Mercedes as the thrilling and sexy women Sasha, Deidra, Christina and Holloway enter their lives! Kai and Holloway’s shaky past gets revealed while Lisa drifts further away from Kai. Yasmin witnesses Sasha and Deidre’s torrid love affair reach explosive new heights. Tai is forced to choose between Mercedes and Christina. Dre’s bad boy behavior gets her into more trouble.

“The L-Word and Noah’s Arc may be fading to black on TV, but viewers still can watch the drama and passion of same-sex relationships on The Lovers and Friends Show, a cult phenomenon taking root across the country and turning some local women into sex symbols.” -The Miami Herald