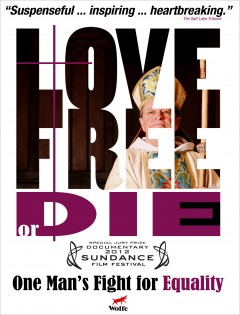 Love Free or Die (Special Jury Prize winner Sundance 2012) is about a man whose two defining passions the world cannot reconcile: his love for God and for his partner Mark. It is about church and state, love and marriage, faith and identity-and one man’s struggle to dispel the notion that God’s love has limits.

In the film, Gene Robinson becomes the first openly gay person to be elected bishop in the high church traditions of Christendom. Bishop Robinson’s elevation in the sleepy New Hampshire diocese in 2003 ignited a worldwide firestorm in the Anglican Communion, one that has become so heated that there is still a chance of a schism in the 80 million-member denomination. One year after being muzzled by the Archbishop of Canterbury, he finds himself speaking from the steps of the Lincoln Memorial at Barack Obama’s Inauguration. Gene Robinson confronts those who use religion as an instrument of oppression, and claims a place in the church and society, not just for LGBT people, but for all.

Love Free or Die reunites the filmmaking team of Macky Alston and Sandra Itkoff who collaborated on The Killer Within. Alston also directed Family Name which premiered at Sundance and prior production credits for Itkoff include Defamation and Cadillac Desert.

“Illuminating . . .a thoughtful reflection on the divisiveness of homosexuality in organized religion, focusing on the quiet crusade of openly gay bishop Gene Robinson.” – The Hollywood Reporter

“Effective chronicle of a church in crisis. . .  A nicely-observed character study/activist piece. Gene Robinson is quite lovable.” – Film School Rejects

“Despite facing death threats and opposition within his own church, Robinson is a sensitive, funny, and altogether inspirational subject.” – HitFix

“Although Robinson never intended to be the exemplar of gay bishops, “Love Free or Die” shows his side of the story – to continue serving God while staying true to his sexual orientation.” – Fox News

“FOUR AND A HALF STARS!   It not only forces us to examine our opinions, but it moves us to tears.” – Shadows on a Wall

“Within seconds of meeting him (Robinson) on screen you’ll be captivated by his goodness and strength, in tears when he’s under threat and when he’s triumphant.” – Movies.com

“A moving chronicle of the slow but steady changes put into motions by Robinson as a bishop and a gay man . . . See this documentary. Tell your congregation, colleagues, and friends about it.” – Spirituality & Practice

“The footage of his various news coverage (60 Minutes, The Today Show, The Daily Show) is entertaining.” – Cinebanter

“The film serves as a heartfelt homage to a true pioneer” – Evan Mulvihill, Queerty