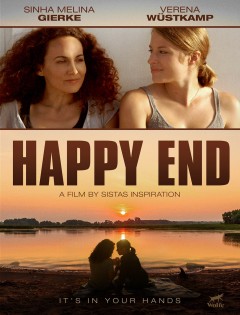 This high-energy romantic road movie co-stars the beautiful Sinha Gierke (It’s Not Over) as aspiring law student Lucca, and the stunning Verena Wustkamp as her new friend Valerie. Irresistible chemistry blossoms between them as the two women embark on a wild adventure to deliver the ashes of recently deceased friend Herma to her final resting place — against the wishes of Herma’s family. Invigorated by Valerie’s free spirit, Lucca rebels from her father’s conservative plans as her dreams for the future evolve. Their lives will never be the same again.

Happy End is the debut feature from writer-director Petra Clever, known for her popular lesbian short The Mermaids which was a hit on the LGBT film festival circuit.

“Extremely well-made… While Happy End would logically be listed in any catalogue’s Gay & Lesbian sections, its pleasures are universal.” — MovieCityNews