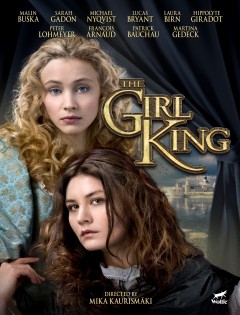 “The Girl King is beautiful… the chemistry between the two women is spot on.” — AfterEllen.com

“A standout performance from Malin Buska, who plays the tomboy Queen with such a high level of intensity that you half expect her to jump through the screen.” — Film Journal International

This lush English-language period  drama recounts the life of Sweden’s Queen Kristina, an enigmatic, flamboyant, and unpredictable woman centuries ahead of her time who ascended the throne at age six, was raised as a prince, and strived to bring peace and education to her country—while pursuing an illicit romance with her female royal attendant. Growing up as a tomboy with a strong intellectual appetite, young Kristina (an electric Malin Buska) finds herself thrown into a political frenzy as a teenager. Saddled with the Thirty Years War between Protestants and Catholics, Kristina steers her country away from the conservatives while privately grappling with her own sexual awakening, in the form of Countess Ebba Sparre (the radiant Sarah Gadon), her lovely lady-in-waiting. Her quest to understand love runs parallel with her quest to understand humanity and the violent and restrictive forces conspiring against her. Torn between the conflict of political and personal aspirations, Kristina chooses to make one of the most controversial decisions in history.

“The Girl King is beautiful… the chemistry between the two women is spot on.” — AfterEllen.com

“A steamy and sumptuous period piece… this romantic re-imagining doesn’t flinch as the queer queen invites her beautiful handmaiden to be her “bed-warmer” and refuses to don dresses or marry.” — OutMagazine.com

“There’s more than enough drama, complexity and speculative intrigue in the single decade of Christina’s adult reign to sustain an epic miniseries…The primary focus here is on the monarch’s passionate devotion to lady-in-waiting Countess Ebba Sparre (a wide-eyed Sarah Gadon), whose status becomes a matter of bawdy public rumor even before Christina appoints her official ‘bedfellow.’” — Variety

“At times, The Girl King is a traditional epic with beautiful period costumes, cavalcades and sword fights…What breaks the mold, is the character of Christina, her aplomb, her very masculine energy, her tomboy outfits, her intellectual curiosity, her exchanges with Descartes and the fact that her bold, challenging thinking is actually the heart of the story and in the middle of the screen.” — La Presse

“Finnish director Mika Kaurismäki’s take on Kristina’s real-life story is lush and energetic and boasts a standout performance from Malin Buska, who plays the tomboy Queen with such a high level of intensity that you half expect her to jump through the screen so she can chew you up and spit you out. Less staid and serious than period dramas are generally presumed to be, The Girl King tosses history lessons up on screen along with swordfights, philosophical ruminations, a devilishly unhinged mother, and a scene in which Kristina and her lover/lady in waiting Ebba Spare (Sarah Gadon) get hot and heavy on top of a copy of a medieval manuscript colloquially known as ‘the Devil’s Bible.’ Oh, and gorgeous clothes. The film brings a level of quasi-camp that’s unusual for the genre, but no less welcome for it.” — Film Journal International

“Kaurismaki blends history, psychology, intrigue, drama and modernism into a rich and stunning filmic painting set in the 17th century for the tastes of today’s audience. It’s a vanguard masterpiece not to be missed.” — FilmFestivals.com

“The story is rich and full bodied. Each character is integral to the film. The costuming is equally integral.  Therefore, you can feel yourself becoming drawn into this world that you cannot imagine. You stand in the Court with these people. This is not the world of say Henry VIII or the world of Games of Thrones. It is as large, but it is more importantly a world where a complex and real woman shows us what it means to almost have it all and survive.” — Epochalips.com