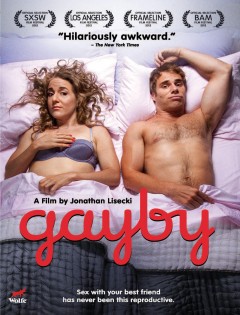 Handsome Broadway actor Matthew Wilkas (“Spider-Man: Turn Off the Dark”) co-stars with the hilarious Jenn Harris as a gay guy named Matt and his straight best friend Jenn who decide to have a baby together — the old-fashioned way!

Hilarious, sexy, wacky and romantic, this perfectly told New York tale from writer-director-star Jonathan Lisecki follows the travails of Jenn and Matt all the way to one of the happiest happy endings you’ve ever seen.

INSTINCT MAGAZINE named GAYBY the NUMBER ONE GAY FILM OF THE YEAR!

HUFFINGTON POST hailed GAYBY as one of the TOP GAY CULTURAL MOMENTS OF 2012!

“Universally hilarious . . . At this point, if it’s not the best comedy of the year, it’s easily the best to transcend the comedy formula.” – SLANT MAGAZINE

“Celebrates the foibles of modern gay life and handles the new challenges that it presents with enthusiasm and genuine wit.” – AFTER ELTON

“Affectionate comedy . . . Harris and Wilkas are an amusing odd couple.” – THE NEW YORKER

“The sweet-natured comedy is flavored by warm characters, an appealing cast and tangy observations on friendship, dating and relationships – gay and straight.” – Hollywood Reporter

“Lisecki directs deftly and lightly, and spreads the jokes around his strong cast.” – Screen International

“There hasn’t been as entertaining an offbeat pair since the days of “Will & Grace.”” – Fresno Bee

“Gayby excels thanks to its clever use of dialogue and situational humor.” – College Movie Review