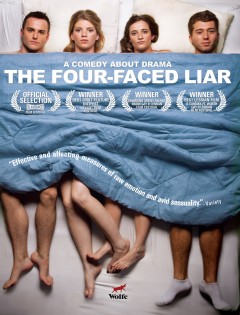 From out lesbian writer/actress Marja Lewis Ryan, The Four-Faced Liar is a terrifically entertaining comedy about drama.

The adorable Marja Lewis Ryan stars as Bridget, a hip, womanizing lesbian who loves Emily Bronte, and who lives with her guy pal Trip (Todd Kubrak). One night, they meet straight-laced New York newbies Greg (Daniel Carlisle) and Molly (Emily Peck) at their favorite hangout, The Four-Faced Liar. Molly is a bit appalled by free spirited Bridget – but she’s also attracted to her, and in time, the friends’ lives are hilariously complicated when the two women fall in love.

“Intelligent, sexy and witty snapshot of messy relationships, sexual awakening and life in the making.” — SoSoGay.com

“The script is tight, and the drama feels raw and real, thanks to excellent performances from each lead and spot-on pacing.” – AfterEllen, Danielle Riendeau

“The Four-Faced Liar is refreshingly honest about its characters and doesn’t try to stuff them into cutesy boxes. Instead, it makes them confused and conflicted in a way that’s perfectly accessible for anyone who’s ever been in love or thought maybe they were in love or really, really wished they weren’t in love.” – Backstage West, Sarah Kuhn