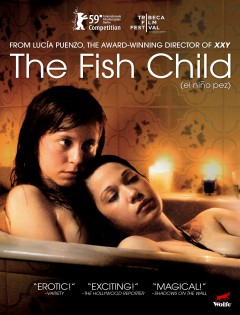 “A special film, about an adolescent lesbian love affair that is so much more.” —AfterEllen.com

The gorgeous Ines Efron stars as a wealthy teen in love with her family’s 20-year-old maid (played by pop star/actress, Mariela Vitale, aka Emme). Will their elaborate scheme to be together succeed? A passionate love story from one of Argentina’s top directors!

Celebrated Argentine director Lucia Puenzo (XXY) returns with this gripping tale of forbidden lesbian romance and a crime heist gone wrong. Gifted Argentine actress Ines Efron stars as Lala, a teenager from the most exclusive suburban neighborhood in Buenos Aires. Lala is in love with Ailin, her family’s 20-year-old Paraguayan maid (Mariela Vitale, aka Emme). The girls hatch a plan to rob Lala’s family to fund their dream of living together in Paraguay, at the shores of lake Ypoá. But while Lala waits to be reunited with her lover in Ypoá, Ailin is detained in the outskirts of Buenos Aires for a crime she did not commit. Desperate to be with her girlfriend, Lala hatches a dangerous rescue plan to get her back.

“A special film, about an adolescent lesbian love affair that is so much more.” —AfterEllen.com

“Likened to a bold Argentine Thelma and Louise, Lucía Puenzo’s follow-up to her Cannes winner XXY wraps a passionate love story in the arms of a pulsating thriller.”– TRIBECCA FILM FESTIVAL GUIDE

“A dreamlike fairy tale, with magical imagery that really sparks the imagination.” – SHADOWS ON THE WALL

“The chemistry between the leads is fantastic – despite all their difficulties, it’s easy to buy them as a couple. Whether they’re making out in Lala’s bedroom planning their runaway, reminiscing in the bath, or hitting the dance floor.” — AfterEllen.com