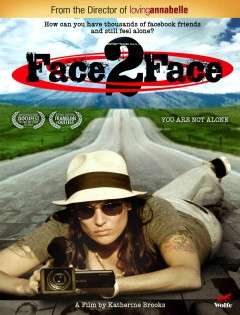 “A cathartic journey filled with upbeat and positive images; ultimately, the film endorses the value of personal connection.” — Curve Magazine

After major surgery, Katherine found herself feeling isolated and alone. Spending her days on Facebook, Katherine noticed she had 5,000 virtual friends, but had not had a hug in over a month. Struck with the idea that it takes more than a friend request to be a friend, she posted the status update: the first 50 people who say YES…I’m coming to your city to meet you face to face.

Within 9 minutes, Katherine had her 50.

Funded solely by 846 backers on Kickstarter, in the summer of 2011, Katherine set out on a journey that would change her life and those around her.

“Katherine Brooks has an organic visual style that allows her work to be quietly powerful and boldly energetic.” – LA Weekly

“Impressive . . . It speaks to Brooks’ ability to connect with people that the ‘friends’ open up to her so quickly. . . takes us to places we never expect to go.” – The Los Angeles Beat