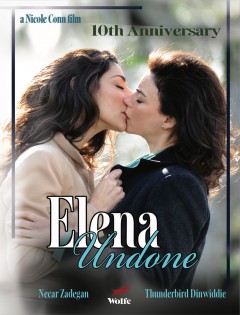 When fate brings Peyton, an out lesbian writer into the life of Elena, a straight ,woman and wife of a pastor, friendship transforms swiftly from a crush into a torrid extramarital affair. Elena can barely begin to rationalize the nature and magnitude of her desires, which are complicated by her dedication to her son, Nash, and her sense of responsibility to her marriage. As their relationship evolves into love,  Elena confronts the choice of leaving Barry and fracturing the family or ending it with Peyton and continuing to live a lie. But the decision may be moot. As Peyton risks more of her heart, her fear of breaking it causes her to step away and Elena faces the looming challenge of convincing Peyton that they were meant to be.

Voted one of the all-time Top 10 “Best Lesbian/Bi Movies” by AfterEllen.com!

“Zadegan and Dinwiddie are electric together!” – The Philadelphia Inquirer

“– Dinwiddie and Zedagan have an on-screen chemistry many actors in lesbian films lack and it’s a pleasure to watch.” – About.com

“Fantastic, nuanced performances. . . [Zadegan’s and Dinwiddie’s] scenes together sparkle and shine with chemistry and life . . . fantastic and enormously compelling!” – AfterEllen.com

“As well as a compelling storyline, ELENA UNDONE has some hot sex scenes and the notoriety of containing the longest on-screen kiss in cinematic history.” – The Seattle Lesbian

“Enchanting homage to the power of love.” – Philadelphia Q Fest “A well-made film, from acting to editing.” – CherryGrrl.com

“The chemistry between Necar Zedegan and Traci Dinwiddie cements ELENA UNDONE as the lesbian film of the festival.” – Colorado Springs Independent

“Combines the enchantment of falling in love for the first time with the reality and responsibilities of long-term commitments.” – Greg in Hollywood

“The next big lesbian movie!” – Bound

“An amazing, heartfelt, romantic film that… should be ranked with some of the best romance films of all time.” —FILM ADVENTURES