Date for Mad Mary, A 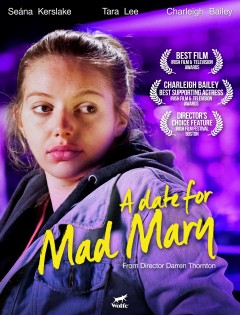 A DATE FOR MAD MARY tells the story of ‘Mad’ Mary McArdle returning to her small Irish home town after a short spell in prison – for something she’d rather forget. But everything and everyone seems different. Her best friend, Charlene, is about to get married and Mary is maid of honor. When Charlene refuses Mary a ‘plus one’ on the grounds that she probably couldn’t find a date, Mary becomes determined to prove her wrong. Her attempts at dating are a disaster and she winds up feeling more alone… until she meets Jess – the lesbian wedding photographer – and everything changes.

It is a tough and tender story about friendship, first love, and letting go of the glory days, starring Seána Kerslake (Can’t Cope/Won’t Cope, The Lobster), Tara Lee (Raw, The Fall) and Charleigh Bailey.

Seána Kerslake is incandescent…triumphant ….a contemporary character study of some genius- Irish Times