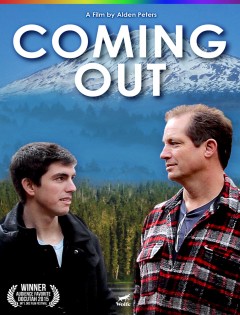 Coming Out follows young filmmaker Alden Peters on his journey coming out gay, capturing everything on camera as it happens. This groundbreaking coming of age film places viewers directly inside the raw, intimate moments when Alden reveals his true identity to his family and friends, ranging from the painfully awkward to the hilariously honest. A story bridging generations and societal divides, this award-winning documentary makes us rethink what it means to live an honest life, ultimately leading us to a place of understanding and acceptance of oneself and one’s community.

When Alden Peters searched for a film that showed the process of coming out, he found nothing but fiction. Every coming out story was told in hindsight, and nobody discussed what happened immediately after coming out. He wanted to see that entire process. As he began planning how he would come out to his family and friends, Alden decided to make the film he wanted to see.

The film acts as a framework for LGBTQ youth to pay attention to digital community and issues larger than themselves. It’s also an accessible resource for families of LGBTQ youth and those unfamiliar with the LGBTQ experience.