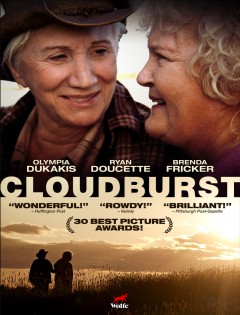 “A beautifully acted and engaging love story. Prepare to laugh, cry, and fall a little bit in love with Stella and Dotty.” — AfterEllen.com

Stella and Dot have been together for 31 years and have faithfully accompanied one another through life’s ups and downs. Now in their seventies, Stella is hard of hearing and Dot is legally blind.

Dotty’s prudish granddaughter, Molly (played by Genie Award-winner Kristin Booth), decides the best place for Dot is a nursing home that will provide all the necessities. This forces Stella and Dot to make a bold decision: they will leave their hometown and make their way to Canada, where same-sex marriage is legal. It’s a last-gap bid to stay together.

En route to Canada, they pick up a young hitchhiker, Prentice, played by newcomer Ryan Doucette. A small-town boy turned modern dancer, he is returning to Nova Scotia to visit his dying mother. Despite his bravado, Prentice is a confused and wounded soul who has much to learn from Stella and Dot as they wage their own unexpected battle – after three decades, can they keep their family together?

“Must-see road film with a new twist at just about every turn . . . brilliant and witty” – Pittsburgh Post Gazette

“Dukakis turns in a magnificent performance . . . moving and funny.” – The Fresno Bee

“A genuinely hilarious and touching lesbian road movie, probably the best since Thelma and Louise.” –  Berkshire on Stage

“This exquisite film gives it all: a beautiful love story, a daring road trip, laugh out loud humor, and an unforgettable journey of the heart. . . This is a film you will always remember.” – The Rainbow Times

★★★★ “It’s one of the few unabashedly sentimental celebrations of love I’ve seen in quite some time.” – Greg Klymkiw, Canadian Film Corner