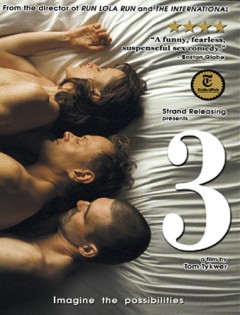 Hanna and Simon, a couple in their early forties, live together in Berlin. With their 20th anniversary looming, they both become restless despite being truly and deeply in love. Unbeknownst to one another, they separately become acquainted with Adam, a younger man, and fall in love with him. Clearly not your typical 1930’s romp, this reinvention of those classic films with Tykwer’s sleek direction is a playful update: an intellectual study of a modern couple looking for redefinition in a world of absolutes.

A NEW YORK TIMES CRITICS’ PICK FOR OVER TWO MONTHS!